There are a wide variety of laser used by eye doctors to treat a number of conditions. Laser is often used to treat diseases of the retina including diabetes, macular degeneration, vein blockages, retinal tears and many other problems. 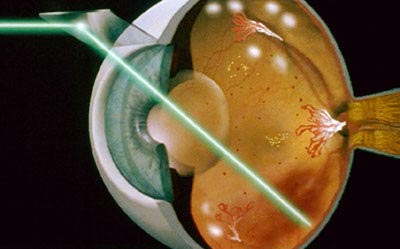 Above diagram of laser beam directed onto retina by using a mirrored contact lens placed on the outside of the eye. The patient has diabetes.

Retinal laser is a coloured beam of controlled light produced either by an argon gas tube or by solid state crystal (YAG). It has its effect by photocoagulation. Essentially heat is absorbed by the target tissue resulting in controlled destruction of that tissue. Whilst this sounds harmful, its long-term benefits have been well demonstrated in a number of large trials and is standard of care for many eye diseases.  Having laser treatment is quite easy as it is mostly done in the office. The pupil will be dilated and the surface of the eye anaesthetized. You will see the laser beam and sometimes feel it. Only occasionally is it actually painful. Immediately after the laser treatment your vision will be dimmed for about 10 minutes. There is no special aftercare and you can go about your normal daily activities in most instances. More than one laser treatment may be needed, particularly for diabetics. Laser was used extensively in wet macular degeneration in the past but it has been mostly supplanted by Lucentis injections.

Laser is also used to treat glaucoma in a number of ways. It can be used to create alternative fluid drainage pathways or it can be used to enhance the drainage of fluid through existing pathways. Argon laser is used to do a laser trabeculoplasty whilst YAG laser is used to do other procedures such as iridotomy, and SLT or selective laser trabeculoplasty.

YAG laser is also used to create windows or openings in the membrane behind the lens implant in some patients after cataract surgery. About 10% of all cataract patients will eventually develop a smudge in this membrane. This affects vision but is easily treated with the laser.